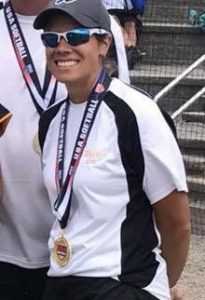 Audra VanBrandt’s softball career started on fields of the city of Detroit and suburban Indianapolis.  She was relatively a late bloomer as a pitcher, not getting her first formal instruction until the summer after her 9th grade year.  She took to working feverishly at her training and helped lead her small 1A school to defeat a large 5A school (before Indiana implemented a class system) for her school’s first ever sectional title in any sport.  She continued her athletic career at Concordia University where she played both softball and volleyball.  Her softball highlights at Concordia include: National Christian College All-American, NAIA Academic All-American, 3x All-Conference, 2 conference championships, and Concordia’s first appearance in NAIA regionals.  She is on Concordia’s record board in over 20 categories (including pitching, defense, and offense) and has been inducted into the school’s Hall of Fame.  She earned her BA and MA Education, has over two decades of experience teaching high school students, and has held several coaching positions over the years, from youth to travel to high school teams.

Here is what Audra has to say about her decision to join our organization:

“As a former pitcher, I was often approached to provide pitching instruction for younger players.  While I was familiar with what worked for me, I didn’t feel I had the latest information on efficient, effective and healthy pitching techniques researched specifically in accordance with the female body.  My pitching career of 7 years is short by today’s standards.  While I escaped any major injury, I know other pitchers that have dealt with chronic pain and injury well into adulthood.  Knowing that today’s pitchers have longer and more intense careers, it was important to me that if I was going to teach I was only going to teach what was best for the player.  I took my daughter to a Tincher instructor some years ago and felt I finally found what I as looking for.  While coaching various teams, I referred several other players to the Tincher method.  I’m so excited to now be certified to teach and train young players.  This game continues to give so much to me and I want to give my best back.”

Here is what Denny says about Audra.  “The minute you look into her eyes, you see two things, a genuine smile and someone who will demand your best.  Audra has that ability to immediately bring out the right qualities in a kid.  They can relax, trust that she will guide them well, and know that she will be very honest with them all of the way through their development.  She is smart, disciplined and in it for all of the right reasons.”