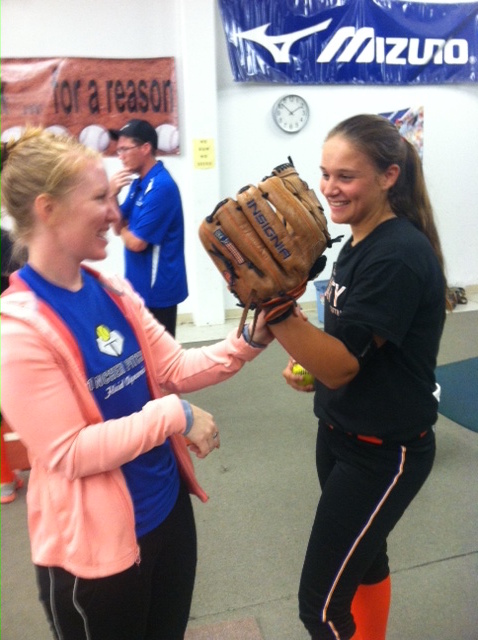 Born and raised in Whitehouse, OH Jenn was a true utility player in every sense of the term, playing at least one game at every position on the field during her HS career. Also during her HS career Jenn earned accolades at multiple positions including a 1st Team All-State Pitcher while leading her team to a State Championship, pitching 7 shut-outs through tournament play, including 2 perfect games and boasting an ERA of 0.65 for the season. Earning a scholarship to Charleston-Southern University Jenn took a medical red-shirt while battling an unknown neurological illness. After transferring to a smaller school to focus on recovery, Jenn was able to return to playing shape for a few short seasons and recorded a record setting 16 home-runs
from the plate in her Freshman outing. While continuing to work get back into pitching shape, Jenn learned the importance being a dynamic pitcher and solidified her belief in proper fluid form.  Although not being able to physically maintain pitching form for a sustainable period, Jenn did assist her Evangel University Team to multiple appearances in the Super Regional and National Championship tournaments. Upon completing her playing career, Jenn coached for 2 seasons at Azusa Pacific University in Azusa, CA working as both the hitting and pitching instructor.

Jenn now lives in her hometown outside of Toledo, OH with her husband and daughter, Easton, and is expecting another little one on the way. After working in the mental health field for 4 years, Jenn has a passion to assist players to become not only physically strong through proper mechanics but mentally strong as well. Rugged means “having or requiring toughness and determination,” which is essential to achieve any success as a pitcher, but more so essential in life. Jenn believes in building character through sport and desires her players learn how to overcome obstacles on the field and off the field, which is why she has named her business Rugged Softball.

Jenn says: “After working with multiple coaches in my young pitching career, I finally found a coach who believed in a fluid motion and was able to find some success with his method. After pitching through illness for so many years, I knew that something was still not quite right with what I had learned, and taught, and took to the internet for some answers. Upon finding Denny and Fluid Mechanics it finally fit together. Denny was able to paint a complete picture in the most efficient and effective way possible and helped me convey everything that I had danced around for years.”

Here’s what Denny has to say about Jenn: From our very first telephone conversation, I knew we wanted Jenn on board. Her personal story is inspiring, her background is extremely strong, and she relates to kids in a very special way.  When training her, there were times I was learning as much from her as she was getting from me.  She has put a lot of thought into this career and you quickly see, within her, a desire to be the best of the best.  She is going to continue to be a positive influence on her kids, yes, but also our Instructor Group.  We are all better for having Jenn on board.